Maybe Stubby Currence missed his calling as a stunt driver! 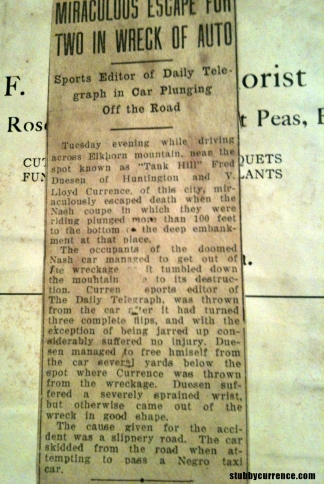 “Sports Editor of The Daily Telegraph in car plunging off the road.” (click photo to see a larger size)

Miraculous escape for two in wreck of auto

Sports Editor of Daily Telegraph in Car Plunging off the road

Tuesday evening while driving across Elkhorn mountain, near the spot known as “Tank Hill” Fred Duesen of Huntington and V. Lloyd Currence, of this city, miraculously escaped death when the Nash coupe in which they were riding plunged more than 100 feet to the bottom of the deep embankment at that place.

The occupants of the doomed Nash car managed to get out of the wreckage (before) it tumbled down the mount…to its destruction. Currence, sports editor of The Daily Telegraph, was thrown from the car after it had turned three complete flips, and with the exception of being jarred up considerably, suffered no injury. Duesen managed to free himself from the car several yards below the spot where Currence was thrown from the wreckage. Duesen suffered a severely sprained wrist, but otherwise came out of the wreck in good shape.

The cause given for the accident was a slippery road. The car skidded from the road when attempting to pass a Negro taxi car.

I suspect some tomfoolery was going on. But thank goodness, Stubby knew how to hit dirt, or I wouldn’t be here 🙂

My guess is this happened in the 1920s. This poor car had to die a horrible death: 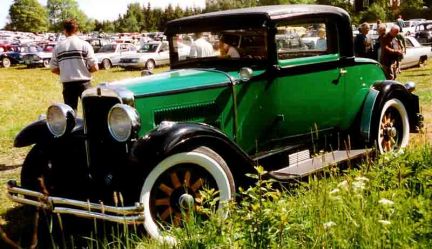