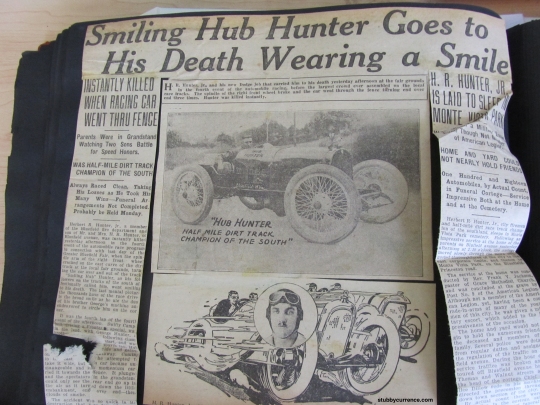 Race car driving was a big interest for Stubby. His personal papers included lots of photos of cars zooming on race tracks, plumes of smoke billowing up. So the death of “Smiling Hub” Hunter, a Bluefield race car driver who died in 1924, must have personally affected him, since he put the press clippings in his personal photo album.

Below is the full text of two articles, including Hub’s obituary. Stubby (as Virgil Currence) is listed as one of the many “flower bearers” at the end of the second article.

What I don’t know: Not sure these articles appeared in the Daily Telegraph or the Sunset News or who wrote them, since there are no bylines. It is possible Stubby wrote them—he was reporting by 1924 and it does have his typical writing flair.

Sometimes it’s easy to detach yourself when reading about past tragedies, but loss is evident even reading this today. The writing helps set the scene, but it is much more graphic than what gets printed now.

Below are my favorite excerpts based on the writing. I’m making it my mission to bring back the word “machine” for “car”. That’s just classic, don’t you think?